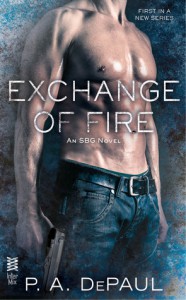 Sandra (alias Wraith) isn't the person she pretends to be. She's a shade, on the run from an organization she used to work for. She was a sniper but after a bad operation, she wanted to quit and never touch a gun again. But nobody has succeed in leaving the SBG alive, at least not since Victor directs it. Without telling her teammates, she faked her own death five months ago and ran away to a town where Grady, an ex military, lives.

But soon, her past catches up to her and she needs to run again. For Grady, it's obvious something's up with her and that she's more than what she's letting on. He's not going to give up until he knows everything, even if it put him in danger.

Overall, I liked it but I expected more from this book. I didn't really connect with the characters. I was confused as to who was who at first when there was different points of views. I just wanted to skip those passages to get to more interesting things. I was bored sometimes, even if there were lots of actions. The romance wasn't mind blowing but it had nice elements with some sexy moments. Also, the drama with Talon was a little unfinished. I liked him and I didn't want to see him hurt.